Everybody had the same thing on their minds while settling in to watch the Kings play the Florida Panthers on Sunday afternoon.

Wow there are a lot of empty seats in Florida. #LAKings

The BB&T Center was about as full as everyone’s come to expect for a game in Florida, but at least the important people showed up.

Even representing on the other side of the country.

The Panthers defeated the Pittsburgh Penguins 6-3 just two nights before, so coach Sutter tapped the Kings’ flawless goaltender Ben Scrivens to start in net. Save percentage based on 14 minutes of ice time aside, Scrivens really did have some fun stats from playing against Florida heading into the game.

We asked (demanded), and we received. Scrivens was steady right from the go. The Kings played well in front of him in the first period, but the Panthers still got the first high-quality scoring chance. Scrivens bailed the team out in the only real highlight of the initial 20 minutes.

Then the LA Kings had a really great second period! I know. I’m shocked, too.

The team came out with more energy (shock!) rather than less (awe). The Brown-Kopitar-Williams and King-Richards-Carter lines especially dominated puck possession. The Kings generated as many scoring chances as they had in the first. On the one hand, the Panthers aren’t a strong team, but on the other hand, previous losses to the Winnipeg Jets and New York Rangers proved that any Kings failure to support the puck and consistently forecheck can make even dumpster fire opponents look superb. The Kings have been gradually cleaning up defensive zone work throughout the last three games, allowing them to dictate more of the play.

Halfway through the period, Mike Richards battled Panthers players for the possession behind their goal, including recovering the puck after his first pass attempt was broken up. His second try was a no-look pass to Daniel Carcillo, who fired a shot right to the net and scored.

It gets weirder. Jordan Nolan got an assist on the goal in addition to Richards.

Interestingly, Jim Fox pointed out on the Fox Sports West broadcast that Richards’ pass is a great example of how shallower nets make certain plays possible.

I hope an honorary third assist was given to the very deserving Florida net for the goal.

Ben Scrivens stayed on point in the second frame, and the entirety of hockey media paying attention to this game wanted to make sure that everyone knew he graduated college and has a brain and feels pretty strongly about using it to do insane things like read books.

In the 3rd period, Jarret Stoll sped down the wing and sent Nolan a pass that he tipped right past Markstrom. If Nolan manages to do this even one more time, he’ll both match the number of goals he scored last season and potentially get me to stop saying, “There’s no tip-in Jordan Nolan can’t miss!” any time he does exactly that.

ALERT: Nolan has also scored a goal before Anze Kopitar! And it gets weirder. Carcillo was awarded the second assist.

Whoa, I didn’t know the Kings could shoot from anywhere but the outside.

Multiple-point games for Carcillo and Nolan! Depth scoring! Is this the real life, or is this just Sunrise, Florida?

Honestly, in a game like this, the only way it could’ve possibly ended is with a shutout for Scrivens. 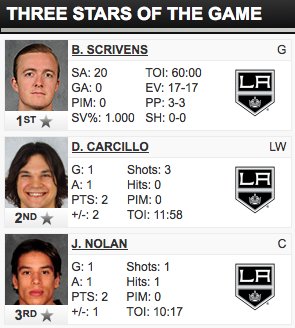 The "Professor" @scrivens_30 with a lesson in perfection @LAKings @NHL #congratsmate

Look at that save percentage! Maintained like a boss. “Professor” Ben Scrivens continues to be both a scholar and a perfect goaltender.

The Kings record improved to 4-2-0, and they added three 5v5 goals to their stats in one game. Excellent. On to — oh, wait, they’re not allowed to get the hell out of Florida yet. On to just a different part of Florida, then. Okay.