Another week, another opportunity to see who achieved greatness and who’s fallen in a toilet and can’t escape. Spoiler alert: the latter applies to the Kings.

After faltering for a couple games, the Anaheim Ducks are back to winning in spite of everything. On Thursday night, they even played without their captain and top line center. Ryan Getzlaf was a late scratch, ruled day-to-day with a lower body injury. The Ducks still won 5-2, breaking their standings point tie with the Predators and reclaiming the top spot in the NHL.

@wyshynski ANA/LA. It's not even close.

@AdamJBrady you realize a rivalry has to go both ways, right? It doesn’t exist just because you hate the Kings.

It’s fun to know that the Ducks’ Director of New Media still hates the Kings and Kings fans so much. It’s probably been an interesting week watching the Ducks continue to push for the President’s Trophy while the Kings start to circle the drain. 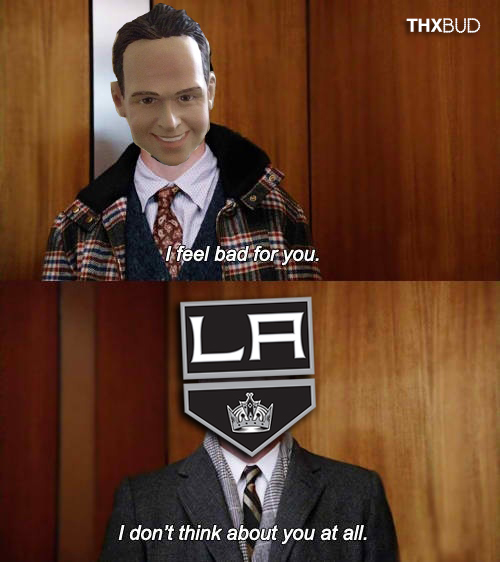 Goaltender Pekka Rinne had his return to the lineup spoiled by a loss to the Ducks, but the team is probably still excited to have him back overall. They never risked falling out of a playoff spot. Carter Hutton did his best to hold down the fort while Rinne was out, including making this crazy save against the Maples Leafs on Tuesday on the way to a 4-3 win.

It’s February, and the Blues are looking nearly unstoppable again. They won seven straight games, going 9-0-1 in their last 10. The team earned standings points in
13 games, dating back to a 7-2 win over the San Jose Sharks on January 3rd. That’s, uh, bananas. It set a franchise record.

The Blues haven’t had entirely smooth sailing. The streak came to a spectacular end in Friday evening’s 7-1 rout at the hands of the Columbus Blue Jackets. Plus, defenseman Kevin Shattenkirk sustained an injury during Monday’s game against the Washington Capitals.

The injury requires abdominal surgery and now Shattenkirk will be out for several weeks.

The Chicago Blackhawks have been losing quite a bit lately, including being shut out in consecutive games. No one expects the slump to last long, but it’s pretty funny that the Kings can’t beat anyone right now and yet the Blackhawks managed to lose to them. Hahaha.

Daniel Carcillo returned from his suspension on Friday, and when asked about whether he’d learned anything or would change, he said… no.

Daniel Carcillo on if latest suspension will alter the way he plays: "It hasn’t yet. It’s not going to, no." #Blackhawks

Highs and lows for the Sharks this week. They lost to the Edmonton Oilers in a 13-round shootout, and then lost to the Calgary Flames. On the bright side, John Scott made this a multi-goal season for himself and prevented the Sharks from getting shut out in that game.

San Jose then followed up that loss with a hearty drubbing of the Vancouver Canucks. Not all bad.

Holy poop, there was a truckload of drama surrounding Evander Kane. He was a healthy scratch for a game, and first people thought it had to do with him wearing a tracksuit to a teammate meeting. Then it turned out that allegedly Kane decided not to show for a game after teammate Dustin Byfuglien tossed the now-infamous tracksuit into the shower to “send a message.”

Kane’s agent says there’s no conspiracy around Kane getting surgery now, after a lot of rumors about drama. It’s hard to tell what’s real but the good news is that Winnipeg may finally, finally be forced free Kane to a different market.

This is how the Flames were feeling early in the week.

They’ve added another win since then, but then they got shut out by the Penguins on Friday night. Johnny Gaudreau suffered a skate blade cut to his wrist during Monday night’s game, but he returned and has been cautious since.

The Flames have also gotten some good news about top draft pick Sam Bennett this week. He practiced for the first time since being sidelined after shoulder surgery in October.

The Canucks are actually not entirely terrible this season, but they’ve been noticeably inconsistent. The Sharks dominated them 5-1 on Thursday night, for example. Also, even though they’re currently still playoff team, fans keep on dumping their tickets. CBC reports this week that a fan base previously used to paying hundreds of dollars to see the Canucks can now get tickets for as cheap as $30.