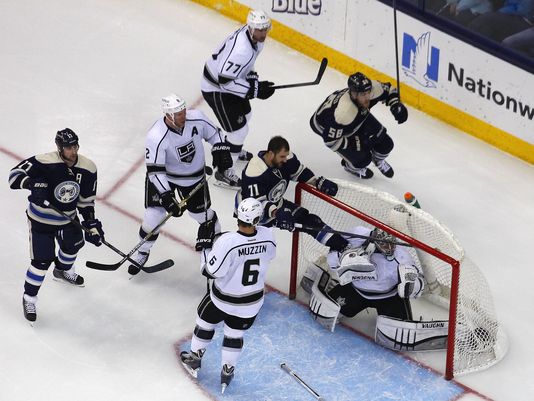 In what was another solid road performance, the Kings let it become closer than it really was, because why not? If someone could tally up how many goals have been scored against the Kings with the goalie pulled vs. how many empty net goals the Kings have scored, that would be great. I’m fairly certain teams would just go with that strategy from puck drop, if they simply had the facts.

But the Kings held on for dear life, which included some top notch Quick goaltending in the mad scramble in which the Kings literally could not clear the zone for two minutes, but secured a one-goal victory AND a road victory nonetheless. I myself would have preferred a five-goal victory, but that’s neither here nor there.

My face during the last two minutes.

The Kings did a very Kings-like thing, getting scored on first in the first few minutes of the game, off of the first shot by CBJ, on an innocent play that went in off of Kings’ defenseman Jamie McBain, who just wanted to keep his scoring streak alive, guys.

But then they did a very UN-LIKE Kings thing, and came literally right back on the next shift and tied it up, with Tanner Pearson-replacement Dwight King scoring off of a nice feed from fan favorite* Jeff Carter.

* Not a fan favorite

That shift would be the start of a very inspired game from That ’70s Line Remastered, as each member of the line would put up a goal, including two pivotal response-goals that saw a CBJ lead or tie vanish before they had any time to really start feeling good about themselves.

Jeff Carter has 4 goals and 5 assists in 8 games against CBJ since The Trade.

The best part of that is Rich Hammond treating the Jeff Carter acquisition as a proper noun, like a famous war, or “The Decision.” Warranted, IMO.

#Lumbus booing Carter is like me still being pissed at a girl from high school, who was out of my league, and only went on 1 date with me.

But seriously, CBJ. I get that he insulted your mothers or something, but he played 39 games for you. It’s been three years. You’re a promising team. And he seems to eat your boos for breakfast.

In the meantime, if Mike Richards could be demoted or Jeff Carter can be publicly derided every game, that’d be great, as the Kings playoff chances would greatly improve.

Dustin Brown continued his stretch of effective play, capping off an impressive shift with an insurance tally to make it 4-2, which would end up being the game-winner, since the Kings are garbage at closing out games.

On a side note, a lot has been made about Jonathan Quick’s subpar numbers this season, and while of course it cannot be denied that this is far from his best season, the amount of blame constantly placed on him is pretty ridiculous. Yes, he ended up letting in three goals last night, but the amount of grade-A opportunities the Kings let up on a pretty limited amount of shots was telling, and he made plenty of key saves to keep them in the game, including a preposterous save on Brandon Dubinsky to preserve the (then) two-goal lead.

Team-wide, the defense has been far from what we as Kings fans have come to expect these past few years, but it’s just a reality of this wacky season, and it’s probably best to accept that the Kings are going to have to find new ways to win. Scoring four goals is definitely a grand plan.

It was a solid, if nerve-racking win, in which the Kings mostly dominated. The score could have been much, much different if they could have put away a few more golden opportunities. All in all, this thing seems to be heading back in the right direction. If it weren’t for the last ten barfarific minutes of the Panthers game, the Kings would have finished out the road trip a respectable 3-2.

*Checks calendar, finds that Calgary is up next*