Kings vs Ducks Game 1: Always with the Dramatics 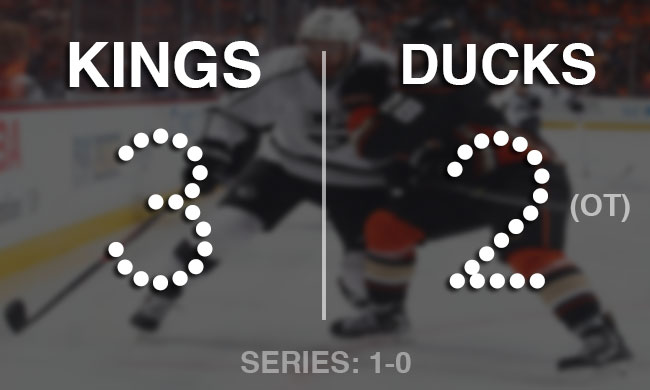 The LA Kings always have to do things the exciting way.

Who wants to win a series like a normal team when you can instead play it do or die and reverse sweep your opponents? What better time to tie up a game than 7 seconds before the final buzzer? Why not just give all your fans heart attacks? Questions to ponder.

The Ducks seem to be pushing the preposterous #PaintItOrange, but it was delightful to see plenty of black jerseys infiltrating the Honda Center.

One of the cuties of the game was one Alec Martinez who opened up the series scoring with a power play goal. Marian Gaborik tosses a nice backhand to Martinez who sneaks towards the net unnoticed and gets his first goal of the playoffs.

Not too long later, the Ducks are able to tie it up when Quick gets too aggressively attached to tracking Getzlaf and leaves a wide open net for Beleskey to simply toss the puck in. Meanwhile, everyone is yelling for Quick to just stay in the damn net. The second period sees the score remain tied, with both teams playing on par with each other. It was very much a “feeling each other out” kind of game.

That all changes when 8 minutes and 8 seconds into the third, #8 Teemu Selanne scores his 1st of the playoffs to give the Ducks the lead because of course that’s what he would do. The Kings weren’t going to give up just yet, but they certainly weren’t in any rush to tie it up, prolonging my anxiety about a million fold.

The second cutie of the game is Hero Marian Gaborik who bats the puck out of mid-air, 7 seconds before the end of the third, to send the game into overtime.

Even Getzlaf seems to be excited about how great Marian Gaborik is, and the prospect of bonus hockey. 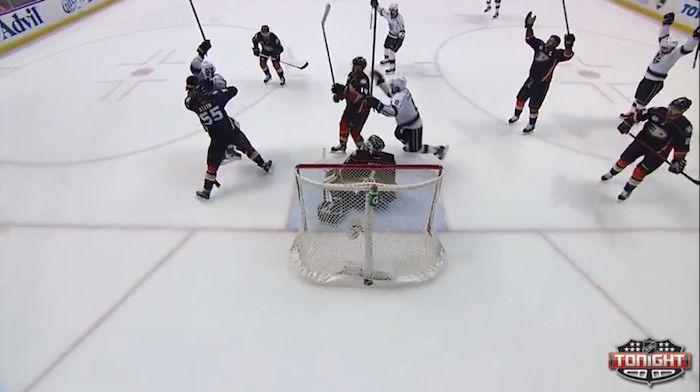 Early in OT, the Ducks put a lot of pressure on the Kings and had plenty of excellent scoring chances to win the game. Quick was strong with blocking those shots, but he needing the helping hand (well, the helping left shin) of Cutie Alec Martinez to keep the game going.

With that save and the Kings still in it, the teams traded chances back and forth until Game 1 Hero Marian Gaborik decided he didn’t want to only score the game-tying goal, but the game-winning goal instead. A fantastic deflection off of the fantastic pass of Anze Kopitar sealed the deal and won the Kings the first game of the series.

The game also saw the loss of Robyn Regehr, but the rest of the Kings’ defense picked up the slack pretty nicely. Anze Kopitar snagged assists in each of the Kings’ goals, grabbing at least a point in each game and bringing his playoffs point total to 13. The Kings have now won 5 straight games, and besides some lackluster passing this game, they’re looking pretty solid against a Ducks team that they couldn’t seem to beat during the season.

Is this, I think this is what optimism feels like.