Best Of The West, Week 5: The Weird And The Wild

Granted, it’s early, but it’s always fun to marvel at the unexpected before the grind of a full 82-game season shifts everything into its right place.

And thus, at present, 4 of the teams currently in the top 8 of the Western Conference did not make the playoffs last year. 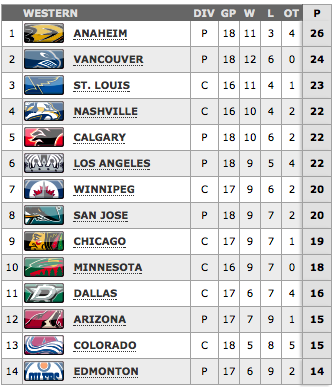 Thankfully, the Kings are still one of them despite largely mediocre play as of late.

Here’s how it’s all shaking down as the NHL season creeps up on the quarter-mark:

It seems like when the Ducks aren’t hilariously embarrassing (a la ’11-12), they are at the top of the Western Conference. It’s just kind of their thing. While they aren’t playing spectacularly well, with 6 of their past 7 games going to the extra time, and only securing the victory in 2 of those 6 games, they are still consistently piling up the points, despite having a depleted roster due largely to the mumps.

UPDATE: Perry and Beauchemin test results reveal both have the mumps. Both players are considered day to day.

Perry is cleared, but still has yet to return to the lineup. Beauchemin is not quite so well.

Bailey, the Kings mascot, was chastised by Puck Daddy for his cautious handling of the Ducks Saturday at Staples Center.

No mumps for me #protection pic.twitter.com/n2KYIhEaVq

Meanwhile, this week Ryan Kesler reminded Kings fans everywhere of their dormant loathing for him. He also recently indicated that he’s extremely interested in signing an extension with the Ducks.

The John Tortorella-less Canucks continue to prove to the NHL that they’re still pretty decent at hockey (and that Tortorella is still an ineffective, caveman coach), despite being trounced by the lowly Arizona Coyotes this week 5-0. They’re 2nd in the Western Conference currently, just 2 points behind the Ducks.

They’re also doing a pretty rad photo series called “Behind the Lens.” Check out their behind-the-scenes photos from their visit to LA this week.

Third in the west despite having to deal with prominent injuries themselves, the Blues traded away Jordan Leopold today to the Columbus Blue Jackets for a 5th round pick in 2016. Leopold was one of their prized defensive acquisitions at the  2013 trade deadline in an attempt to finally get past the Kings, which was ultimately unsuccessful. Leopold has been a healthy scratch more often than not lately, but he’ll likely get more time on Columbus’ embattled blue line.

The Perds have cooled off a bit after their unexpected start but are still holding down the fourth spot. Whether they can hold their playoff position through April remains the challenge, but if rookie Filip Forsberg keeps on his ridiculous pace (8 goals, 12 assists), they have an okay shot. Tanner Pearson needs to pick his game up if he wants to grab that Calder Trophy to go with his Stanley Cup ring.

In the game against the Blues, goaltender Pekka Rinne got caught in his own goal post, which the Blues broadcast hilariously dubbed the “check of the game.”

Somehow the Flames are still a thing?? They’ve performed better than anyone expected, largely due to defenseman Mark Giordano (6 goals, 14 assists), who’s making a name for himself as probably the most underrated defenseman in the NHL. He was also named the 1st star of the NHL last week.

The Winnipeg Jets, after an awful start to the season, are riding a 7-1-2 high in the past 10 games, thanks in part to some inspired play by Blake Wheeler that has the Hockey News dubbing him the “heart and soul” of the Jets. Despite this recent unexpected success, they are still probably the least interesting team in the NHL.

Holding down the last playoff spot in the West are the good ol’ Sharks. They haven’t really done much of note this week besides lose 4-1 to the Florida Panthers, milking that generous trend of losing to garbage teams before the Kings (inevitably) do.

Goaltender Alex Stalock was injured this week, likely off of a collision from Antoine Roussel.

He had surgery on his knee and having no timetable for his return means ending his battle to strip Antti Niemi of the starting job for now.

1) In a spot precisely no one expects them to keep, the CHICAGO BLACKHAWKS are currently outside of the playoff picture. It’s a good thing Dan Carcillo might be back soon to save them.

2) The MINNESOTA WILD are on a bit of a slide as of late, possible due to the fact that half of their team may or may not have the Corey Perry mumps.

Nino Niederreiter scored his 1st NHL hat trick, snapping their 4-game losing streak, which is nice for them. It was against Buffalo, however, so I’m not sure if it counts in the record books.

3) The DALLAS STARS are woefully underperforming based on all pre-season predictions, losing 7 in a row before beating the Coyotes this week and shutting out the Kings (of course). They are just 2-6-2 in their last 10 games.

Kari Lehtonen will very likely win “Save of the Year,” which means nothing but is worth your time.

The Stars traded the corpse of Sergei Gonchar to Montreal for the half-corpse of Travis Moen.

Tyler Seguin also got another damn hat trick, leading the league in goals with 12, which begs the question: How are the Dallas Stars still so bad?

4) The ARIZONA COYOTES slid into last place in the Western Conference, unseating the longtime champion Edmonton Oilers. It didn’t last long because the Coyotes then won 5-0 against the Canucks in a game that included a hat trick from Martin Hanzal. But seriously, is this the year of the hat trick? Am I making this up?

5) Oh, the COLORADO AVALANCHE. Everyone expected them to be bad, but probably not quite this bad. It’s still surprising. Are they the dark horse for the Connor McDavid sweepstakes? That is a terrifying prospect 3-4 years down the road.

On the bright side, the Avs look like they’re finally getting an outdoor game. Hundreds of miles away, the Minnesota Wild ponder why they even bother to call themselves the “State of Hockey.”

6) LOL, the EDMONTON OILERS. They don’t even deserve to ruin another top draft pick.