Toffoli to Manchester, Scrivens to Edmonton 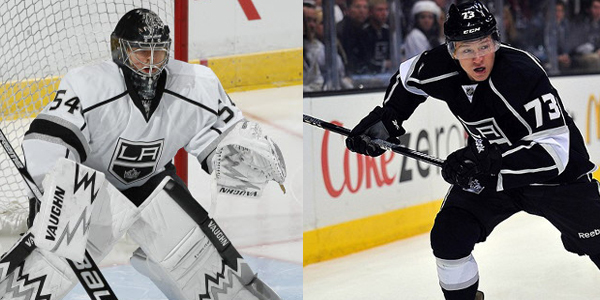 An olympic year means the NHL has a sort of unofficial pre-trade deadline deadline. Several teams are trying to make moves ahead February 7, when the NHL essentially shuts down for two weeks while some of its major players head to Sochi. The Kings aren’t exempt.

Dean Lombardi rattled Kings fans by reassigning Tyler Toffoli to the Manchester Monarchs on Tuesday. It’s not a move many fans agrees with. Robert from Jewels From the Crown wrote an excellent post on why taking Toffoli out of the line up hurts the Kings, but it boils down to this: The Kings are better with Toffoli playing; they’re worse without him.

One possible mitigating factor is that NHL management teams received a memo about how many games rookies could play ahead of the Sochi 2014 Winter Olympics.

(1/2) Something to consider: NHL teams received a memo prior to season saying that a player who plays more than 15 of 20 games prior to…

(2/2) Olympic break cannot be assigned to AHL during break. Strome move clearly made w/ eye to having him play during break. #Isles

Allowing Toffoli to remain eligible to play during the break makes more sense than letting him sit idle for a chunk of what seemed like it would be his first (almost) full rookie season. The Kings called up Linden Vey in Toffoli’s place, and it also makes sense to get him and Tanner Pearson more time to develop with Kings. However, during practice, coach Darryl Sutter shot this reasoning down.

He hasn’t scored a goal in 10 games,” Darryl Sutter said. “It’s like I told some guys on the ice today. Tyler got to go down to work on his game. Some guys get to go to the press box. Some guys get to go to the end of the bench. I said there’s not much you can do about it. Based on performance. Hey, Pearson, we’ve sent Lindy down. Every team does it. It’s not a big deal.”

If he was sent down solely for performance reasons — I’m sorry, that’s crap. Yes, Toffoli’s scoring has gone cold recently. He hasn’t scored or gotten any points in 11 games, after scoring a goal against the San Jose Sharks on December 19, but if he was sent down solely as some kind of punishment, then Trevor Lewis (38 GP, 0 G, 1 A) should’ve been waived weeks ago. Mike Richards has been Toffoli’s center for most of his time with the Kings this season, and Richards has registered 0 goals and only 3 points in the last 11 games. Richards is a veteran who gets paid significantly more money to produce for the Kings.

Unfortunately for Toffoli, he’s the one guy who can be sent to the AHL among an entire roster struggling scorers. So, he’s gone for now, and Vey’s in, but Toffoli deserves to come back sooner rather than later.

Scrivens was only ever meant to spend one year in Los Angeles at most. When Martin Jones got to play in Quick’s absence and collected 8 wins in his first 8 starts, the end date on Scrivens’ stay got moved up. Wednesday, the Oilers moved goaltender Devan Dubnyk to Nashville in exchange for Matt Hendricks. A second trade came soon after.

Sounds like Ben Scrivens has been traded from LA to EDM, 3rd round pick headed back to LA.

That Lombardi didn’t package Scrivens and a defenseman for one of Edmonton’s left wings was surprising. Kings management are still looking for a left-winger and more options on defense, but for now the Scrivens deal affects last summer’s Jonathan Bernier trade more than the present. Now, in trading Bernier, the Kings have acquired Matt Frattin, a second round pick, a third round pick, and have cleared up some cap space.

Naturally, Martin Jones was recalled to take the role behind Jonathan Quick. Scrivens looks to see some starts in Edmonton immediately.