Panthers at Kings: Welcome Back, Willie!

In retrospect, there was only ever one appropriate way to celebrate Willie Mitchell’s return to Staples Center: defensemen taking over the game.

The shot attempts sell the first line a little short, because even on the very first shift they had a lot of zone time but managed no actual shot attempts. Credit to the Panthers’ ability to keep the Kings forwards working along the boards for stretches of that game, forcing them to rely on defensemen a bit more. But still! The point is it turned out to be the blue line’s time to shine. It made Willie Mitchell emotional.

Okay, it was actually the standing ovation fans gave him that brought on those beautiful misty eyes. Those applause turned out to be the prelude to the real honor ceremony, a deluge of defensemen providing offense. It took until the second period, but Brayden McNabb sent a really heads-up pass to Matt Greene waiting backdoor to deflect the puck into an open net.

“Was that ok? Was I supposed to do this? Where am I?” pic.twitter.com/srUnKIRe6c

What a beautiful goal. We couldn’t believe it either, Greene! But, oh, it’s the truth.

Major, major credit to Anze Kopitar for entering the zone with control on this play and expertly using his body (his butt) to protect the puck until support and a pass opportunity arrived. Selke work, let’s be honest. (It’s never too early to get the campaign started!) 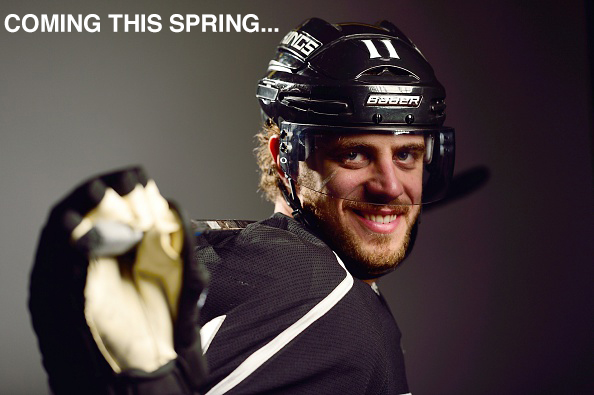 Jeff Carter made it 2-0 for the Kings during the power play. Jake Muzzin’s magnetic eyebrows drew Vincent Trocheck’s stick right to his face to draw the penalty. Surprisingly, the Kings didn’t waste the opportunity. Jamie McBain also picked up the second assist on the goal, his first as a member of the Kings.

McBain had some really rough shifts in the game, especially during the first period, but coach Darryl Sutter choosing to roll lines on the power play rather than send out set units allowed McBain to try to step up, too. It was nice to see that pay off a little. By the end of the game, he’d put in an imperfect but largely solid performance. McNabb’s also really starting to show some comfort and confidence on the ice.

Marian Gaborik earned the second power play goal for the Kings. The best part of the whole play, however, was the very audible unrest from fans in Staples Center who desperately wanted the Kings to just shoot the puck.

It was the Kings’ third power play goal that showed off some more great defensive work. Sure, I mean Robyn Regehr scoring his first of the season, but I also mean Carter using his speed to beat the Panthers player to the puck and gain inside position despite coming from behind.

I also dig that Tyler Toffoli was way more excited about Regehr’s goal than anyone else.

What are you so happy about, Toffoli? Regehr had just stolen your title as the most recent King to score during a McFlurry Minute!

In the third period, the Panthers replaced goaltender Roberto Luongo with Al Montoya, and then the Kings got sloppy. REALLY SLOPPY. They let the Panthers outshoot them 13-2 and score two goals within five minutes. Jimmy Hayes picked up points on both.

Luckily for the Kings, one of the two shots on goal that they managed went into the net. Dustin Brown’s shot wasn’t frozen by Montoya, slipping through his legs and just past the goal line.

Brayden McNabb earned his second point of the night, and the Kings had officially scored three power play goals in one game. They managed to convert on half of their opportunities during 60 minutes of play, bumping their power play up to 20th in the league at 17.5 percent.

The Panthers had the edge in possession all night, but a good start and an excellent second period by the Kings was enough for success. A rough third period is uncharacteristic, since the Kings haven’t generally been a team that succumbs to score effects too much, but Jonathan Quick stayed great in goal and a comeback never fully came to be. All six defensemen picked up individual points to help dispell stories about the lack of production from Kings defensemen, at least for now. Kings win. Two points.