“Play Under Review” is a snapshot of the LA Kings’ progress throughout the season. Some numbers come from NHL reports, Extra Skater, and Hockey Analysis.

Halfway point progress report! Now that the Kings have played 41 games, we’re taking a look at what their season has looked like so far.

This record was more impressive four games ago, but in the grand scheme, the Kings are still tilting toward the winning side of the league. They’re currently third in the Pacific Division and ranked seventh in the NHL in points, tied with Boston.

The Kings 55.7 Fenwick for percentage when playing 5v5 with the score close is second only to the Chicago Blackhawks, who have had possession 55.9 percent of the time. When looking at Corsi, the Kings have the slight edge on the Blackhawks for tops in the league.

Though they’ve let opponents set the pace of some games, the Kings usually make it difficult for most teams to gain too much zone time. Their 1.98 goals against per game also indicates that they’re still the stingiest team in the NHL, so even when teams gain the zone, the Kings don’t allow much.

LA’s ability to score goals has been a big concern throughout at least the last three seasons, and that’s not too different now. The Kings have had periods of high-scoring and extremely low scoring. In their last four games, they’ve scored two goals or less, similar to some scoring inconsistency they experienced in mid-to-late November. Also like that patch, what makes the Kings’ troubles stick out is that, of these last four games they’ve lost, the opposition has won by just one goal.

Right now, the NHL has an average shooting percentage at about 8.8 overall. The Kings’ shooting percentage is 8.2 overall and — as noted in the graphic — 7.2 percent at even strength and a completely depressing 5.3 percent at 5v5, score close. That last number is especially disheartening when considering how great a possession team they are in the same situation.

For comparison: the Chicago Blackhawks, the top offensive team in the league, earned 643 shots on goal through 42 games when playing 5v5 close, according to Extra Skater. The Kings have 639 shots for through 41 games, but where the Kings 5.3 percent shooting percentage indicates many of those aren’t going in, Chicago’s 9.3 percent shows they clearly aren’t having the same trouble. The contrast is less stark when looking at all situations, though other teams that have similar shooting percentages to the Kings and around the same number of shots for generally possess the puck less than the Kings do.

If they’re getting the zone time and generating chances, then why aren’t they scoring more goals? Again, it’s not a new question for the Kings and those totals don’t account for how shot quality might affect scoring, but the numbers stick out.

That turned around for a while. During the Kings’ hottest streak (which we’re counting as the 7-game period from 12/7 to 12/19), they had a 14.5 percent shooting percentage at 5v5 close. Even with the losses, their shooting percentage for the last 11 games is 10.5 percent in the same situation. If they can just find a middle ground, they’ll be fine.

The Kings’ penalty kill has struggled recently, and it’s costing them games. It happened earlier in the season, and it’s happening again now. With the penalty kill ranked 7th overall, it’s not even necessarily that the PK is just bad so much as overworked. The Kings 183 minor penalties taken ranks them third worst in the league, averaging at least four minors per game and leaving them shorthanded for 8 to 9 minutes most nights.

Switching from even strength play to the kill can wreck momentum as much as a good PK boosts it, plus it risks wearing out the guys on special teams. In the Nov 25th game versus the Vancouver Canucks, stacking penalties limited the Kings to three shots on goal in 30 minutes of play during the second and third periods. They made the most of the few shots they did have, winning in OT, but if they keep making a habit of giving lots of power plays, they risk — oh, yeah — giving three goals to the Calgary Flames and losing.

Although they’re on a four-game skid, the LA Kings’ 2013-14 season has gone well for them so far. They had sort of a slow start, had to work through injuries to a few major players in November but wonderful goaltending from Ben Scrivens and Martin Jones on top of tighter defensive play has seen them gain points in the standings quicker than any other Kings team in franchise history.

During early December, that excellent goaltending combined with an above average shooting percentage saw the Kings become one of the luckiest teams in the league. Now that they’re beginning to slump in goal-scoring as goaltending regresses to something a little more human, that luck is slipping. 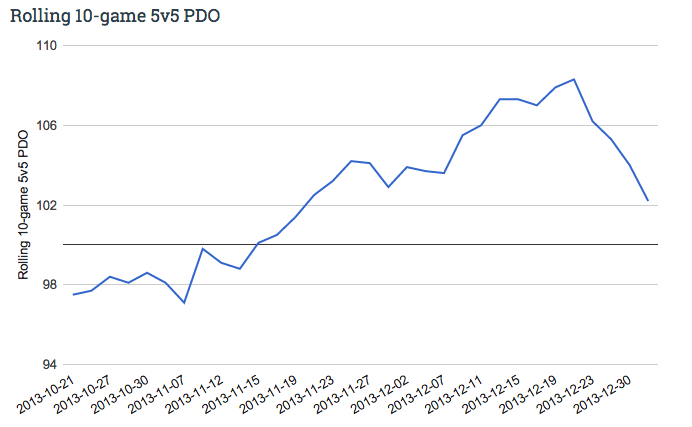 If they were one of the luckiest teams in early December, they’re obviously in a super unlucky slump right now. Their Dec. 30th game vs Chicago is a perfect example of that. It was their best 60 minutes out of the last four games, but they scored zero goals.

The test for the Kings will be how they respond to this in the next few games. Their schedule doesn’t get any easier, and Jonathan Quick coming back to the lineup adds another variable. It’s hardly impossible for them to get back to winning and collect more points before the Olympic break, but it could depend on them finding more consistency to their shooting.

If they can’t do that, they need to do themselves a huge favor and be more disciplined. Penalties have already shown they can be the difference between losing in regulation or managing to secure at least an OT point.