Play Under Review: Winter Malaise – To Worry or Not to Worry?

If it feels like you’ve watched the Kings lose an incredible amount so far this year, that’s because you have. Relatively speaking, anyway. After a blistering 7-1 start to the season, they have won 13 of the 39 subsequent games.

That is not a typo. The reigning Stanley Cup Champions have won just 20 of 47 games overall.

Their fast start suggested no ill effects from that mythical “Stanley Cup hangover,” but their record wasn’t terribly indicative of their play. The Corsi Kings of the NHL were being out-attempted fairly regularly and winning despite this. The Fancy Stats folk among us warned that a reckoning could come.

They were right. And wrong.

The Kings were as terrible on the road as they were good at home. This dichotomy left them in the middle of the West’s playoff pack. Before poor underlying numbers could fully catch up with them, however, their possession play reestablished itself. A team that could barely put up average Corsi numbers in October and early November trounced the NHL in December, but they started piling up losses regularly anyway. In this topsy-turvy world, the Kings went on a streak this year when they were undeserving, and now they often lose despite playing well enough to win.

Fancy mathematical pundits were right in predicting a potential slide but off in the reasoning. The Kings, dedicated to bucking logic, have largely improved their game as the season has progressed, but their record has continued to skid. At 20-15-12, with 52 points, the Kings have their worst 47-game record in four seasons. Worrying that they will be the first reigning champion since 2006’s Carolina Hurricanes to miss the playoffs is not entirely unfounded.

Don’t get too hyped up about that possibility just yet, though. These standings are fluctuating drastically every day. The Kings are in ninth place, one point from eighth place, and a mere three points out of third (and thus a lock) in the Pacific Division. Last week, after a win against Toronto, the Kings were ranked second. This week, after two extra-time losses and Wednesday’s regulation loss to the Sharks, the Kings aren’t even in the playoff picture.

Thanks to their close proximity to the playoff promised land and reputation as lackluster in the regular season, it’s easy to dismiss their middling record as another product of their annual winter malaise.

But is it more? 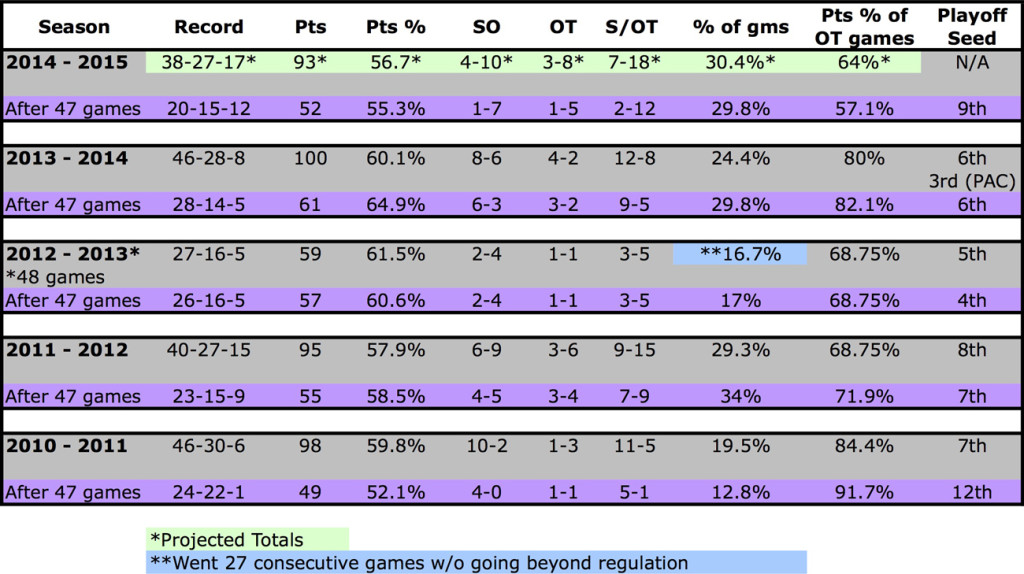 Dating back to 2010-11, what we’ll call the beginning of their current core’s emergence as legitimate playoff contenders, the Kings are at 59.8% in average points percentage. This season the Kings are collecting points at 55.3% on average, or 4.5% lower than in recent history. Over an 82-game, 164 possible-point season, this means the Kings lose just over seven points. With the current postseason picture, that is definitely the difference between making and missing the playoffs.

Much has been made about the Kings’ inability to win games that extend beyond 60 minutes this year. Most specifically, their inability to even score in the shootout, let alone win one, has been heavily noted. The 0-22 (and 2-28 overall) consecutive shootout misses have made for fun Twitter fodder, but the shootout can be dismissed as a crapshoot. Remember 2010-11 when Jarret Stoll couldn’t miss a shot and the Kings went 10-2 (with Quick a perfect 10-0)? This streak is just as unlikely as that one.

On March 17, 2014, the Kings lost in regulation to the Coyotes after relinquishing a third period lead. This broke a 21-0 winning streak with a third period lead for last season. After that game, the Kings went 5-3 when leading after two periods to close out the regular season. This record doesn’t even factor in two games played during the same stretch where the Kings gave up a late lead, went to overtime, and then luckily ultimately won. Suddenly a team that couldn’t lose when leading in the third was noticeably fallible.

So, 126-2-11, and then 5-3. In an eight-game span, the Kings earned more regulation losses when leading after forty minutes (3) than they had over the previous 139 games (2), spanning five years and six seasons.

Perhaps it was always an impossible record to sustain. Unfortunately, that dip in third period dominance has continued into 2014-15. Forty-seven games into this season, the Kings have lost seven games in which they either entered the third period with a lead or gained the lead during the final frame. 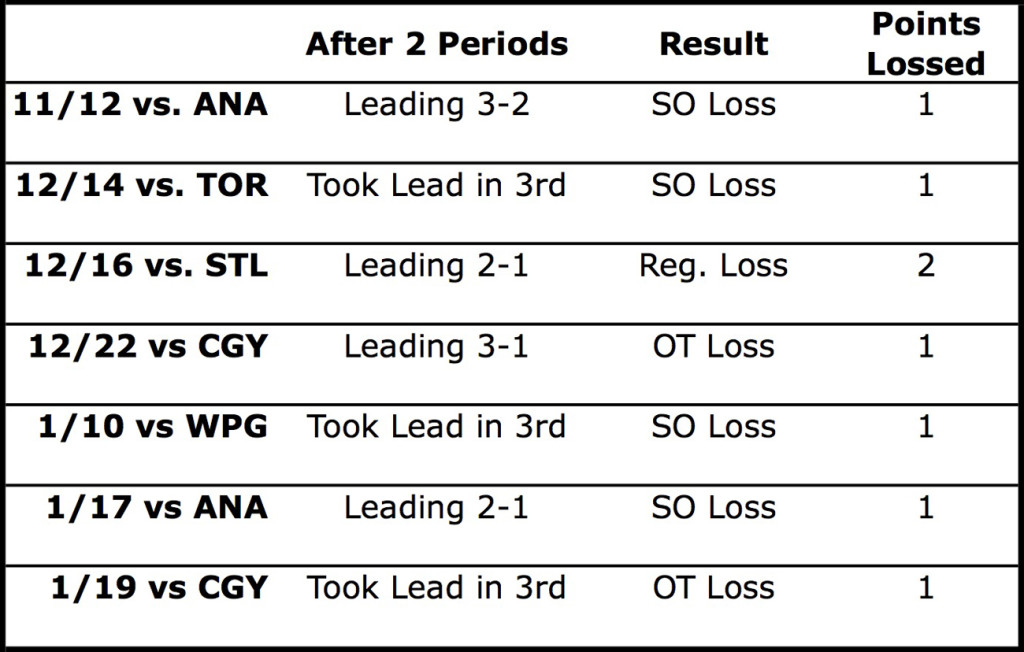 That’s a loss of eight points, or the difference between their current standings and 60 points, good for fifth in the Western Conference.

It’s insane to expect any team to preserve every single one-goal lead that they have, but this trend is right now a big reason why their record is so poor.

It might also be indicative of the changes this team has gone through since last season, especially on the back end. The Kings have regularly dressed players like Jeff Schultz, Jamie McBain, and Brayden McNabb this season. Half of their defense is young, inexperienced, or both, and it’s showing in key moments. Coupled with erratic and recently poor goaltending, a Kings lead is no longer as safe as it used to be.

On the bright side, the Kings have been uncharacteristically good at comebacks lately. They’re losing more games, but they’re salvaging points.

This season they’ve gained more points (11) in games they were losing late than they’ve relinquished (5) in losses where they gave up late leads. Even if we include the three games where they entered the third period tied, took the lead, and then gave it up, that’s still an 11-8 points advantage when looking at comebacks versus collapses.

So, while it certainly feels like they are losing a ton, the Kings are preventing themselves from falling behind too drastically in points percentage. The winter struggle is real.

Unfortunately, the Kings’ overall points percentage is also sitting at a five-year low.

Statistically speaking, this season is most in tune with 2011-12, when the Kings squeaked into the postseason as an eight seed after an incredible run down the stretch. At this point, the 2014-15 Kings have three less points (52) than those 2012 Kings and they’ve lost three more games.

This is technically the worst the champion Kings have ever been at winning.

It would be wise for the Kings to kick it into high gear before a magical stretch run is necessary, but it’s probably not mandatory for them to string massive win streaks together. They’re languishing on the playoff bubble and unable to consistently win games, but the other teams in their pack (VAN, CGY, SJS, DAL, COL) are struggling to do the same right now.

Is it obnoxious that the Kings are unable to win games that extend beyond the extra time? Absolutely. But they are getting 30% of their games to overtime. Nothing beats a regulation win obviously, but pocketing those loser points is keeping them afloat until their luck changes.

And sooner or later, it will. A team with Marian Gaborik, Anze Kopitar, Jeff Carter, Tyler Toffoli, and Jonathan Quick is going start winning some shootouts. They’re going to start winning more games. Their current points percentage in extra time is just 57.1% so far this season, 21% below their averages since 2010-11 (78.1%). Let’s hope that the 35 remaining games are enough for statistics to do their normalizing thing.

Until then, stress and beer.

4 Comments to “Play Under Review: Winter Malaise – To Worry or Not to Worry?”