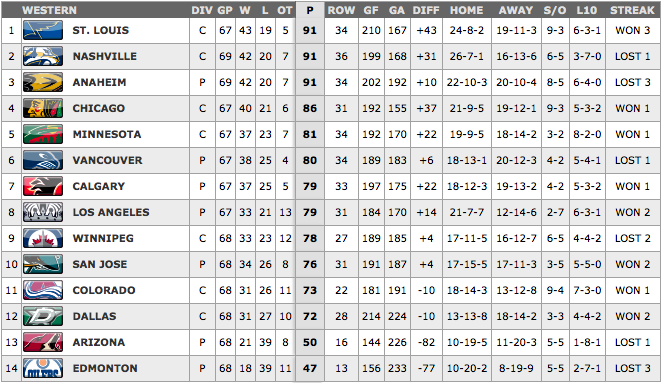 Well, well, well. What do we have here?

Don’t look now, but the Kings are in a playoff spot.

Honestly, at this point you’d think the Blues would avoid being the best team in the Western Conference, because it hasn’t worked out terribly well for them the past few years. Then again I suppose missing the Chicago Blackhawks in the first round is a top priority for the Blues, who royally choked away such an opportunity last season to do the same.

This week the Blues gave up a three-goal third period lead to Winnipeg, fueling conspiracy theories about the Western Conference’s plan to keep the Kings from making the playoffs, but then hilariously won anyway off of a nothing wrister from the red line. We’ll save the video for the Winnipeg segment, because it’s literally standing as the reason they are out of the playoffs for now.

Ken Hitchcock grabbed his 700th regular season win last night when the Blues beat the Flyers. And T.J. Oshie is still somehow alive after being rocked by Dion Phaneuf.

Damn you, Nashville. We were all relishing this season for the one in which the Ducks and Blues weren’t going to be the top teams in the Western Conference, and then you go and lose six in a row, and seven of eight games.

In fact, Nashville’s only win in the past eight games was an OT win versus the lowly Arizona Coyotes, off of a goal from James Neal.

This losing streak has seen them lose to Minnesota, Winnipeg, and now San Jose, and we can only hope we can add the Kings to this tally come Saturday, because honestly, they’ve been no help at all.

The Ducks still technically are tied for first, and would be there outright if not for losing three games in a row, including two games against teams the Kings really needed them to beat. Again with the conspiracies. While they absolutely will win the Pacific Division, their current losing ways are not pleasing coach Bruce Boudreau. Not a great way to enter the playoffs for a team that already believes its success is “a bit of a mirage.”

In other news, Matt Beleskey is set to return tonight after a few weeks out with an upper body injury, and Ryan Kesler and Cam Fowler made a pretty funny video.

The Blackhawks are staying afloat in the absence of an injured Patrick Kane, albeit primarily with good defense, as their offense has dried up.

Newly acquired Kimmo Timonen is definitely retiring at the end of the season, and has a pretty decent shot at finally winning it all with arguably the best team in the NHL.

Forward Joakim Nordstrom will have a hearing after a bad hit on Arizona’s Oliver Ekman-Larsson with 40 seconds left in Thursday night’s game.

The Minnesota Wild continue to defy gravity, going an astounding 19-4-2 since acquiring the Edmonton/Nashville/Montreal/Arizona castoff Devan Dubnyk, in what is probably the very definition of a Cinderella Story. Sitting in 12th place when they acquired Dubnyk, with chatter of firing head coach Mike Yeo, the Wild are now in a playoff spot, with no indication of relinquishing it. In the toughest division in hockey, it seems highly unlikely they’ll be able to catch Chicago, so a wildcard spot is likely their final resting place. The teams at the top will be duking it out for positioning just to avoid having to play Minnesota.

Dubnyk will make his franchise record 26th straight start in goal for the Wild tonight.

The Canucks sit in second place in the Pacific Division, but only two points removed from missing the playoffs altogether. After their 4-0 loss to the Kings last night, and faced with the reality of having to play the Kings two more times before the season’s end, their spot in the playoffs is far from secure.

Prior to last night’s loss, however, Eddie Lack was admirably filling in for an injured Ryan Miller, backstopping the Canucks to a .934 save percentage, and some impressive wins over top teams.

The Canucks, like the Kings, will be watching the frustrating Calgary Flames and wondering why a team so obviously not good continues to win games.

By virtue of more regulation and overtime wins, the Flames hold the tie-breaker with the Kings, currently securing them third place in the Division. They continue to improbably secure wins and points, last week mounting a 4-goal third period comeback versus Ottawa before losing in the shootout.

Jiri Hudler was named the NHL’s first star of the week last week, and Johnny Gaudreau continues his campaign for the Calder Trophy, this week becoming the first Flames rookie since Jerome Iginla to reach the 50-point mark.

Due to the injuries to Mark Giordano and Ladislav Smid, the Flames invited immobile defenseman Douglas Murray to a paid try out today. If signed, Murray would only be eligible to play out the regular season, for reasons yet unclear.

Let’s assume if you’re reading this, you know what’s up.


After a really impressive season, the Jets now find themselves one point out of a playoff spot. They just recalled ex-King Keaton Ellerby, because defensive stalwarts Dustin Byfuglien and Tyler Myers are now both out with injuries, the latter for a currently unspecified amount of time.

There is still plenty of time for the Jets to get back into the playoff picture, and really, it would be a shame for Calgary to make it and the Jets to miss, because the Jets are actually a good team.

– The SAN JOSE SHARKS have won two games in a row and continue to stick around, attempting to salvage their second longest playoff streak in the NHL, behind Detroit’s never-to-be-replicated (soon to be) 24 seasons. Antti Niemi’s place on the roster was allegedly salvaged when the Sharks veterans begged Doug Wilson not to trade him, and he’s rewarded them admirably, with three wins in his four games since the deadline, allowing just three goals total in those victories.

But then today this happened, so the rest of the season will be interesting to say the least:

Simmering issues boiling over in SJ. #SJSharks Thornton on latest from GM Wilson on taking away the ‘C’: “Doug needs to shut his mouth.”

– The COLORADO AVALANCHE have kept their rather tenuous playoff hopes alive off of the stellar play from Semyon Varlamov, who earned NHL’s 2nd star of the week.

– The DALLAS STARS are likely cooked after being a team everyone liked at the start of the season. Tyler Seguin scored two goals in his return after a 10-game absence, although pronounced that his knee was “nowhere near 100 %,” which begs the question as to why he returned so early to a team that is an extreme long shot to make the playoffs?

Rich Peverly hasn’t played a game since his heart-stopping collapse on the bench late last season, but he’s still trying to remain involved in hockey in any way he can, and is currently helping out as a volunteer coach with the Stars’ AHL affiliate.

– The ARIZONA COYOTES have gone full-tank mode after trading off almost all of their good players at the deadline. They snapped a franchise record 10-game losing streak with a shootout victory over the Canucks last week. They also wore these hideous jerseys from the 90s last week in honor of Jeremy Roenick, which everyone now pretends they love:

– The EDMONTON OILERS clinched their 9th straight season without making the playoffs. Astoundingly, their last playoff game was a Stanley Cup Final Game 7 loss to Justin Williams’ Caroline Hurricanes. Last night they mounted a 4-goal comeback agains the Penguins just to lose in regulation anyway. One has to imagine that the change in the draft lottery protocol was implimented so that another star NHL talent can possibly avoid the fate of wasting away in an Oilers jersey.