Lightning at Kings: No Flex Zone

After a heavily disappointing homestand in January, the Kings now seem to be back to protecting their house. They’ve won five consecutive games, including all three at home before leaving town again, and they’ve generally outplayed opponents in those games. This is what fans have been waiting for all season, for all the pieces to line up. 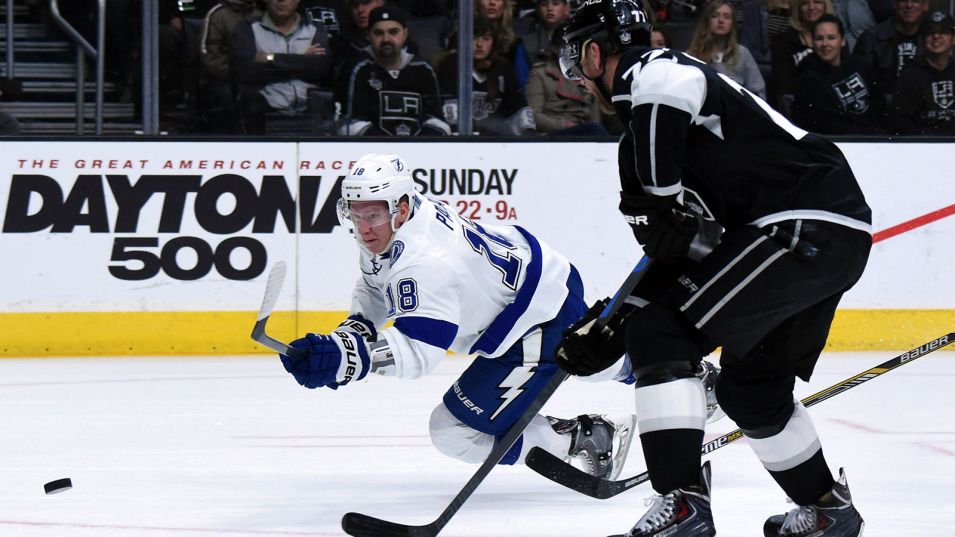 The game against the Tampa Bay Lightning was fairly even in the opening period. Though the Kings were able to kill off an early penalty, the Lightning still eventually struck first at even strength. The Kings went into the intermission down 1-0 but not in trouble.

Starting the second period on the power play seemed to give the Kings a little jump, but then the Lightning wrested control from them and spent a few shifts throwing shot attempts at goaltender Jonathan Quick.

This entire play owned. After Victor Hedman broke up play in the neutral zone, the Kings regrouped in their end. Every pass was clean and hit its intended man perfectly. Restored top liner Trevor Lewis’ pass was the most impressive. He evaded the stick of one Lightning player and connected with a Kopitar who was picking up enough speed down the middle to split the Lightning defense and shoot. 1-1.

Though the Kings had another power play opportunity later in the period, the game stayed tied through the end of 40 minutes.

In the third, it was Jordan Nolan who came through to grab the go-ahead goal.

Nolan recently decided that this is the time of the year where he’ll be a near-perfect fourth liner. It seems to happen for a while every season, and thankfully it’s come right when the Kings need it most. His backhand snipe was equal parts good possession and sheer luck, but whatever. It still counts. Kings lead.

Jeff Carter added one more thanks to a pass from Drew Doughty. All three Kings goals came off the rush despite doing well at driving play for much of the night.

Instead of cruising to their fifth win, the Kings went the more traditional and exhausting difficult route. Carter came close to scoring an empty-netter but the puck went just wide. Instead, the Lightning got some life by making it 3-2, and Quick had to make a sliding save to stop Steven Stamkos from tying the game with a one-timer in the dying moments.

Jim Fox says, “OH!” about how important the late save is, and we love when he does that.

So, not only did the Kings extend their win streak, but they also improved their one-goal game record slightly. If they make it to six wins, they could tie the San Jose Sharks and put themselves in a position to jump back into the playoff picture with a Stadium Series win. Suddenly the Stadium Series game is exciting!