Last week the Kings gained three out of six possible points in the standings. That performance means they finished the week at a solid 50 percent, good enough for a big, fat F grade.

Though losing is a disappointment, Martin Jones’ shutout performance versus the Minnsota Wild and the Kings getting scoring from a variety of players were positive bright spots. Now the competition will become somewhat softer over the next couple weeks, allowing them a chance to stack up more in the ROW column. The Kings’ roster makeup and system are often compared to the Boston Bruins. Both identify as teams who put defense first, and now both are seeing some struggles to their lineups due to injuries, suspensions, etc. They both sit in the first wild card spot in their respective conferences with 29 points, looking to make on-ice performances more consistent.

Of their next six games, this is one of the toughest match-ups. The teams split the season series last go-round, the home team always taking the points. Though the Bruins have largely played just fine without Zdeno Chara in the line-up, including dominating the Anaheim Ducks Monday night despite a one-goal loss, it could still potentially give the Kings an advantage. It’s time to take another crack at the Arizona Coyotes in their building. The Kings continue to struggle to find wins against this team on the road. Luckily the Coyotes continue to be a pretty awful so far this season. They’re 13th in the Western Conference. Only the inexplicably disastrous Edmonton Oilers have been worse at winning and collecting points through two months.

Starting goaltender Mike Smith’s save percentage is still not yet above .900. The Kings need to absolutely take advantage and continue to repair their road record. 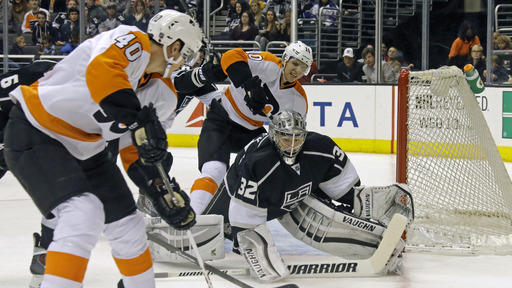 The last time the Kings played the Philadelphia Flyers at home, they allowed Steve Mason to earn a shutout. Steve Mason! As long as that doesn’t happen again, I almost don’t care what the outcome is.

The Flyers have been even worse this season, so really any loss at all is unacceptable. The Kings already added to Jakub Vorachek’s mystique this year by losing to them in overtime on the road and allowing that guy to have a multipoint game. Now the Flyers are floating near the bottom of the Eastern Conference and have lost four games in a row (despite Vorachek ranking second in points, just behind Sidney Crosby). If they manage to keep losing between now and Saturday afternoon, the Kings need to make sure they’re not the group who lets these guys feel like they have a chance to rebound.

It would also be nice if the right Brayden could score this time — McNabb, not Schenn! — so that Kings dans don’t have to end the night weeping softly about the one that got (sent) away.