Kings at Leafs: Not This Again

The Kings lost to the Toronto Maple Leafs in the shootout. Though the result is not what Kings fans want to see, it was another game where fundamentally the team didn’t play poorly. Eventually luck will turn around for them. Play this song on repeat.

Quick hits, because it’s Sunday, and I’ve got a holiday party to attend — 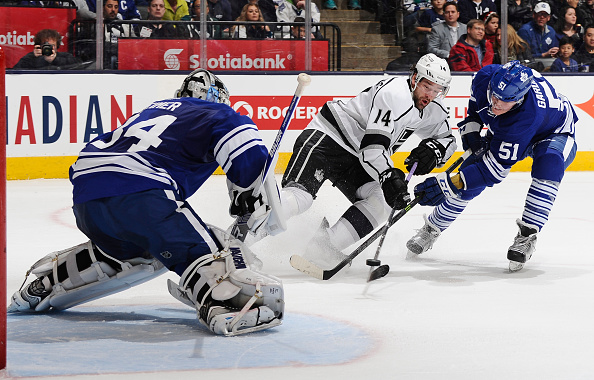 They also actually managed to come back from that two-goal deficit, thanks to goals from Justin Williams, Dwight King, and Marian Gaborik.

The Gaborik goal gave the Kings the lead until another failed penalty kill allowed the Leafs to tie it. Which leads me to…

This means that in four games, the Kings’ penalty kill is clipping along at a dismal 66.7 percent while the power play limps along at 7.6 percent. Woof.

Since the Kings have been a team that takes a lot of stick penalties in the last few years, having an ineffective PK hurts a LOT. It hurts even more when they can’t score at even strength or on their own power play chances.

All of this might smooth out soon, but for now it means the Kings could only escape with a point. The good news is that point was enough to push them back in the playoff picture. So… not all bad?

2 Comments to “Kings at Leafs: Not This Again”